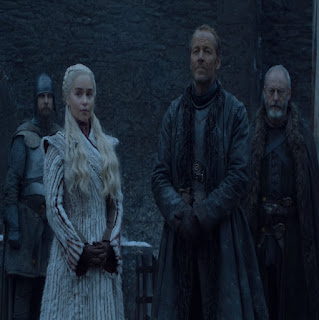 I had once considered The Simpsons to be my favorite show of all time. I never thought it would be overthrown, but sure enough, Game of Thrones easily knocked the funny Fox family down in my heart. I didn't start the series until it was about half-way done, which was good in a way. My cousin Danielle just started the series about a month ago, and now she doesn't have to wait at all for a cliffhanger to resolve. When we last saw everyone in Westeros, things weren't looking so happy for those among the living. 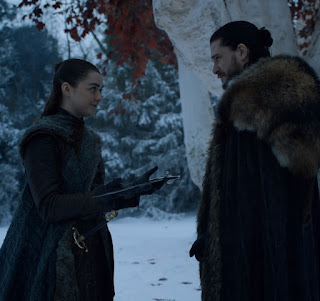 The last season begins as Jon Snow and Queen Daenerys Targaryen arrive in Winterfell. They soon learn that the "promise" Queen Cersei made to fight the undead, meant nothing. The only Lannister to arrive in Winterfell from King's Landing, is Jaime Lannister whom takes the threat of the Night King's army very seriously. Jon Snow reunites with Arya Stark, Samwell Tarley, and Bran whom says he's the Three-Eyed Raven now and not Brandon Stark of Winterfell. 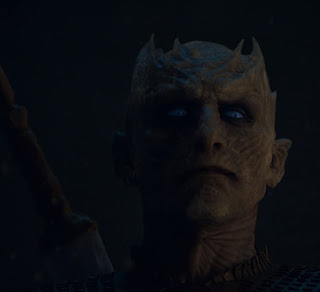 But the Night King had killed Dany's smallest dragon Viserion back north of the Wall. While the living thought the dragon was long gone, Bran inform them that the dragon is "one of them now" and that the dead are marching south. While Winterfell has more Valyrian steel and dragonglass than any other spot in the world due to Jon Snow's leadership, with an army of 100,000 wights, a dozen White Walkers, an undead giant, and a zombie dragon, things don't look good. Queen Cersei Lannister stays safe down south until her enemies are either eliminated or badly injured. Euron Greyjoy is still on her side, and his iron fleet is still an impressive and deadly force. She's still pregnant with Jaime's child, which is still a badly kept secret. 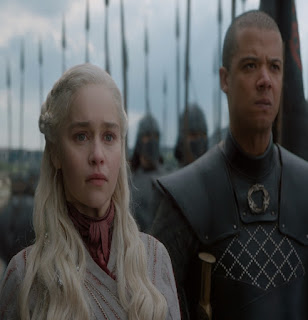 Then there's the question of Jon Snow's legitimacy as the son of Prince Rhaegar Targaryen and Lyanna Stark. His girlfriend (and aunt lol) Daenerys Targaryen isn't going to like the fact that not only are they "family" but he's got a better claim than she does. Not only is he a male, but he's a son of a Prince who should have been a king. 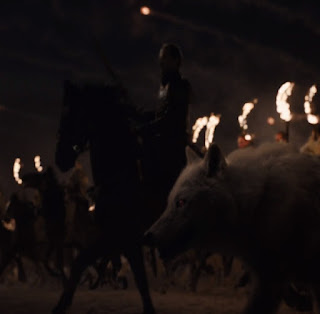 Overall I would say Game of Throne's final season is the worst of the whole series. The dialogue suffers without any books to base it off of, and it's much shorter and rushed. While George R.R. Martin stated that his ending in the books and the TV's show ending would be roughly the same, it's not very satisfying for fans. That being said, it's still the best show on TV, and I would often wake up super-early just to watch it if I had to work early that day.

Yes, lots of fans are unhappy about Season 8. I also understand there will be at least 3 spinoff series filmed, one of which will be a prequel. So your GoT days are not over!

Season 8 was meh, rushed and the last episode was very lackluster and felt rather off.

We haven't seen the final season yet but with some much information out there about it, I couldn't avoid learning about it. Seems a lot of people were indeed disappointed. And I'm not sure I'm going to like how it ends when I actually watch it. It's too bad. After such a long wait for this season, they could have done a better job of it.

GOT is my all time favorite TV series. I was unhappy with the ending, largely because it was rushed and condensed. The producers could have improved the last two seasons by adding episodes to develop the storylines more, so the change in Daenerys, for one, would have been more plausible. At least they left open the possibility of sequels. Have you seen the series "Orphan Black?" That's my second most favorite series.

I know most people really hated this season but I'm one of the few who really loved it. I do understand the complaints about the season being too short, but this season really followed (in a rush way) what I thought GRRM would do with the books. Reading books 1 to 5, I honestly think that everything done this season is what the last book would be about and it makes total sense for Bran to the king. I kinda think that the books were Bran's vision all along and that it has come full circle. That being said, I still want to read the books now to get more details on the Battle of Winterfell, and Jon's thought process before doing that to Dany:D