My (Not So) Favorite Quotes: Trump Thinks Nobody Should Protest Him 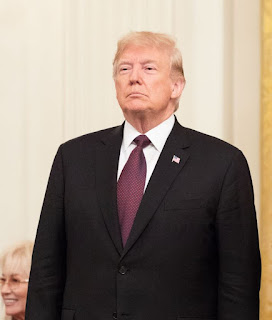 “I think it’s embarrassing for the country to allow protesters. You don’t even know what side the protesters are on.”

The President Cheeto is a man who speaks before he thinks, but I often don't think he can form real thoughts anyway, but he does chatter about a bunch of nonsense. But look at this quote, a huge attack on democracy, and his Republican base, couldn't agree more with him. If Obama had said this back in the Tea Party days, conservatives would have flipped the world upside down.
Posted by Adam at 8:47 PM

He's a worry this man, if only he knew how stupid he is - but of course stupid people don't see clearly.

He's not the sharpest knife in the drawer.

I have a blog post scheduled much later about meeting people from South Africa on our cruise telling us that they were embarrassed for us having a president like Trump.

I love the Mussolini pose.
I wonder does the clown recall what happened to El Duce?
I doubt it.
When will you YANKS wake up and rid yourselves of this baboon?
(Apologies of the real baboons of the jungles etc.)
Colin