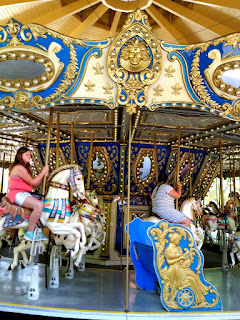 The old merry-go-round is a ride that kind of bores me, but I always ride it at least once. Dollywood's merry-go-round is about the same as any other theme park's or carnival's ride. Most of the seats are horses but one was a dragon. 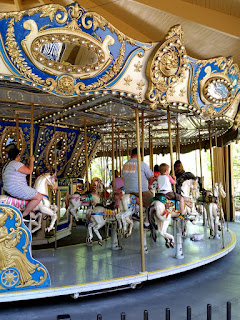 We were the first in line for the next ride, and I mentally decided I wanted to the dragon. Kept taking a look of where the dragon was so I would have the clear advantage of taking it. Then Daisy spoke out loud and said she wanted it. Then this little girl behind us was crying to her mom that she wanted the dragon. I felt a little wrong for indirectly crushing the dreams of a little girl, so I told Daisy to let her have it. Even pointed it out to them so my sacrifice woudln't be in vain.
Posted by Adam at 12:00 PM

That kid totally stole your thunder!!! I will refrain from making Dany jokes:D

That's what children do when they want something usually.

I'm sure you made the kid's days.

Do you buy a ticket at the gates for all rides?
Would be pretty expensive if you had to pay for each ride.
If I recall at "Four Flags over Georgia" and "Disneyland, California"
you could purchase a one day all activities ticket....much cheaper.
You sure like the kids stuff.
Colin

I love the art work on the merry go around.
Coffee is on

Once you get in the gate, that's it. You can ride until the shut everything down.

And I'm going in the order of when we saw things. The bigger rides are in the other two sections of the park.

I have two grandsons who would probably love the dragon too. You and Daisy were very kind. I haven't been on a Merry-go-Round in.... gosh... I can't remember.

Even as a kid I thought merry-go-rounds were boring, but that's because it was always within the context of an amusement park, where there's so many other rides. Maybe if there were no other rides around (as I think may have been the case with the first merry-go-rounds; I think I read somewhere they made their debuts in a regular, rather than in amusement, parks) I might have found them more fun.

You are a saint. Daisy too.

Carousels can be a bit boring, but I always love looking at them. I really thought the ones we came across in Paris were quite lovely.

To this day, I can't resist a carousel. It doesn't turn you upside down or drop you or spin you dizzy sick. I would want to ride the dragon too! Kudos to you and Daisy letting the little girl have the dragon!