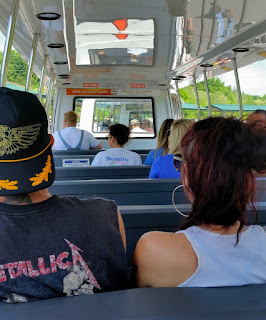 This would be our first time to Dollywood, and I've heard good things all of my life. The only theme park we go to is Carowinds in Charlotte, North Carolina. Carowinds is pretty well designed, so no matter where you park, you can get to an entrance by walking. Dollywood's parking lot is huge, and we had to take their complimentary trolley bus. 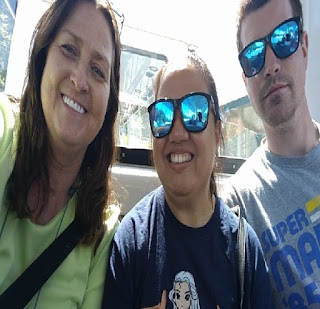 Wasn't a bad ride, but I was excited to finally do something so I wished it could go faster. It wasn't much more to go two days than it was to do one, so we decided at the gate to do one day here on Monday and return again on the Wednesday. 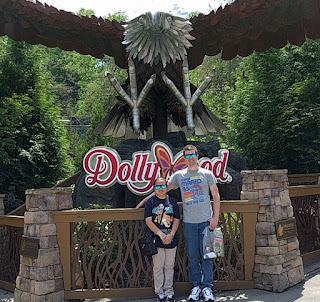 While I will go into a lot of detail in the upcoming days, I will sum up Dollywood in my opinion. It's certainly different from Carowinds. I thought it'd be as wondrous as Disney World (though I've never been there either) just with Dolly Parton's name everywhere. I actually liked it far less than Carowinds. The paths to get to things are oddly designed and it's easy to miss things such as my favorite ride, which I didn't find until the 2nd day. While they have a good number of rides, Carowinds far outranks them in most areas of rides including smaller rides and big roller coasters. Dollywood does have more shows and events than Carowinds, which would explain why my grandmother loves this place, as she would always mention she'd drive all the way up here to visit. Personally, if I wanted to go somewhere just for a themepark in the southeastern United States (but not in Florida obviously), it will be Carowinds. Rides are my passion at these places (I think most everything else theme parks offer are distractions) and Carowinds is king that department.
Posted by Adam at 12:00 PM

You're a rides fanatic because you're young. I understand your grandma's point of view. It's nice to sit down.

I have heard wonderful things about Dollywood. Although never been there.
Coffee is on

I haven't been to Dollywood since the kids grew up, when they were teens they loved being there but it's the only theme park we've gone to so they had nothing to compare to it.
Did you check out the new Wildwood Grove? I think it may be more child centered than adult though.

I've heard the name Dollywood but had no idea what it was all about.

So that's what happens there. Something different to what you are used to.
Used to love rides when younger only chance to have rides was at a show or and when going to Melbourne in Victoria.

Interesting to read your thoughts here.
I do think rides are more for the young, I can understand your grandmother liking the shows.

All the bet Jan

It’s good to have an honest review!

Good to learn a bit about Dollywood!

Have you been to Stone Mountain in Georgia?
Now that is historically excellent.

As I have said/written before, Dolly Patton or no Dolly, nothing would get me to step foot into that bigoted and backward state called Tennessee!
Colin

Sounds interesting, but amusement parks aren't part of my life any more.

Thanks for the advice, but man....as a Dolly Parton fan, I feel like Dollywood is the one for me:D

Interesting place with familiar brand, not Hollywood or bollywood, but dollywood hehe.. I follow your blog now. Thx

During our 2nd day there, I was too.

It wasn't open when we went. Almost, but not quite. A bit of a shame, I found out that there are new rides, pretty cool ones too.

No, we missed it on our journey to Atlanta a few years back.

I've never heard of Carowinds. And, although I love Dolly Parton, unless she's meeting me at the gate, I don't have much interest in visiting Dollywood. (Sorry, Dolly!)

The older I get, the more I appreciate the sit down attractions over rides. We did go to Cedar Point last weekend and I did enjoy the roller coasters, but I much prefer shows nowadays.

Scary carnival rides are behind me, I think. However, I'd return to Disneyland or Disney World in a heartbeat! Have a lovely weekend, my friend!