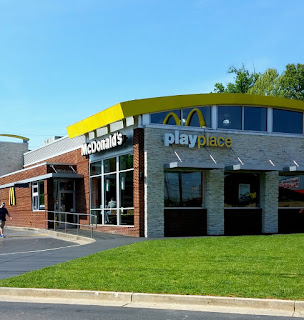 The first thing we did was have lunch at McDonald's when we got to Tennessee, but we meant to have breakfast but we were delayed. I originally wanted Dollywood to be our first thing, but my mother convinced me early that morning that we should do something else on that Monday and let Dollywood be on Tuesday. Eating here gave us a chance to sit down and plan our next move. 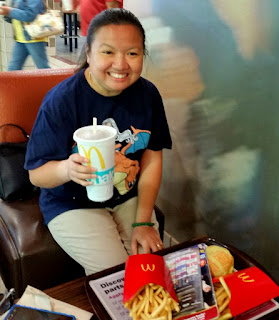 Daisy was happy to have lunch instead, she loves her burgers and fries. While eating, I noticed there was a Dollywood brochure and I decided to read that while waiting on Daisy to eat. Then I realized a blind spot in my planning, Dollywood was closed on that Tuesday, and since it was still before 11am we decided to go as soon as we were done with McDonald's.
Posted by Adam at 12:00 PM

I hope you had a good time at Dollywood when you went.

I bet you did have a good time at Dollywood. Can't wait to hear all about it.

I have been there and enjoyed it. I would love to go back, but would not go on any of the rides.

Good thing you noticed it would be closed so you didn't miss out altogether!

Lovely picture of Daisy.
I hope you had a good time at Dollywood, I'm hoping you may share it in a future post!

I didn't know Dollywood was still around. Dolly is a gem and this place would have to be awesome.

Hope you enjoyed your time at Dollywood.

Good thing you realized that!

Whew! I'm glad that you made it to Dollywood. Things like that have happened to Terry and me as we traveled.

Had to stop and think what Dollywood was about, then looked it up :)

Poor little Oliver would not have a icicle hope in hell in the food department with Daisy being around.
My God, she is an eating machine.
Colin