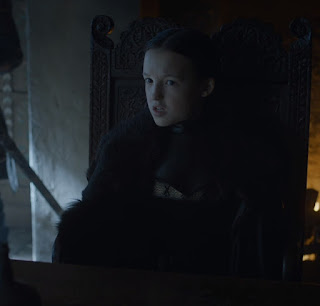 Lyanna Mormont was originally going to be a one-time character, but her actress was so good they expanded her plot. She was one of my favorite characters on the show. She's the Lady of Bear Island, despite being a child. She's also Ser Jorah Mormont's cousin. While a kid, she is very strong and confident. Jon Snow asks her for help against the Boltons, as he remembered the reply she had wrote to Stannis Baratheon. 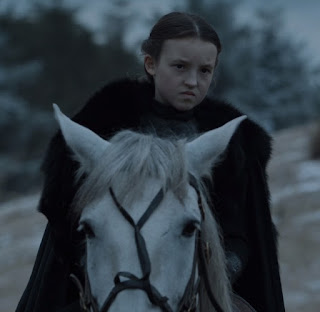 While she doesn't fight in the Battle of the Bastards, that's one scary look. 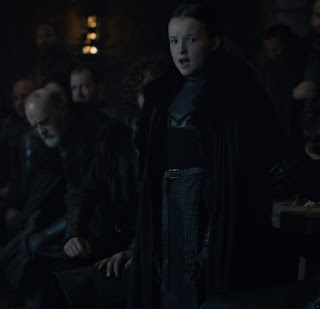 After the Knights of the Vale save the Northmen, Lyanna nominates Jon Snow as King in the North, to which all the remaining lords agree. 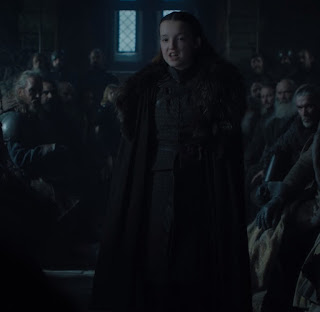 She gets really upset when Jon Snow bends the knee to Daenerys Targaryen and becomes Lord of Winterfell and Warden of the North. Though she seems to understand he did it for the survival of the living. But she wasn't happy about it. 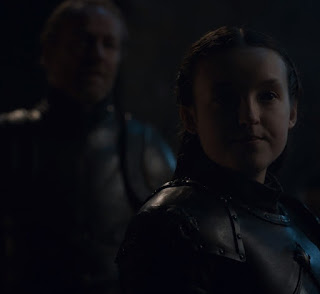 Lyanna is pressured by Jorah to hide in the crypts during the Long Night, but she refuses. She decides to fight the zombie wights and lead her men when the fight comes. 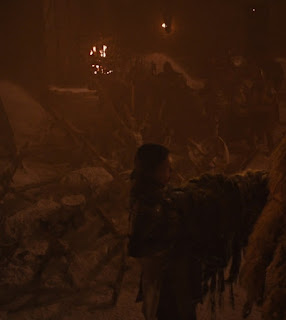 And she dies in the great battle at Winterfell, being crushed by a wight giant. Though she slays the undead beast before falling to her own wounds. I really hated this moment. Especially as she becomes a wight for a few moments when the Night King raises the recently dead with his White Walker magic.
Posted by Adam at 11:30 PM

I really liked Lyanna. I thought she had a commanding presence and held her own among powerful men. I hated to see her die. I was hoping that she would make to the end alive.

She was a bad ass!