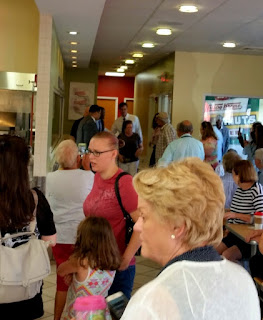 I luckily was off work today, and the local Democratic party let me know that presidential candidate Beto O'Rourke was going to be at the local Krispy Kreme. Our local donut place is owned by Glenn Reese, who is a state senator and Democrat in the state's senate. Pretty much any Democrat of notability that shows up in Spartanburg, ends up shaking hands with Gleen Reese. I waited about thirty minutes (I like to be a little early) and Beto came through the door. The place is pretty small, so it was good thing there weren't more people. That's like sardines in a can. 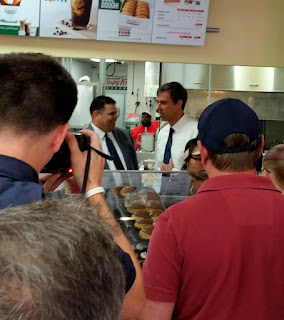 He didn't make a real speech in his time here. Glenn Reese gave him a tour of the place with some other local Democratic leadership following along. 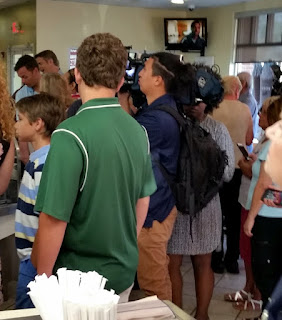 While we waited, a local reporter for Fox Carolina (our local Fox station, bleh) asked me to do an interview. I declined. I don't like to be on TV, and I tried my best to avoid the cameras. But I'm sure I'll go into work tomorrow and someone will say "I saw you on the TV." 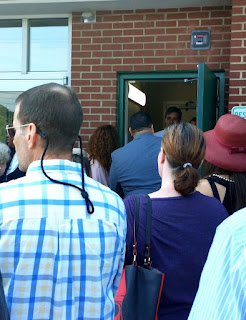 It became obvious the real meet and greet was going to be outside, so I waited until Beto came out. 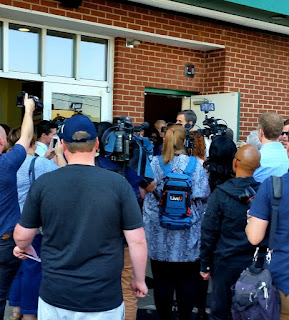 I had to wait a bit. Especially with the local media in the way. 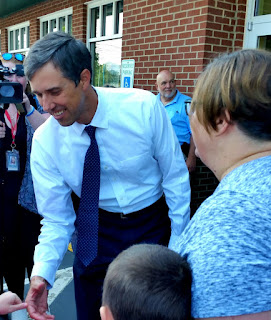 But it wasn't too bad of a wait. This was the first of three events he had to do in the local area today (and probably its smallest, most likely) but he stayed until everyone got a chance to meet him and shake his hand. 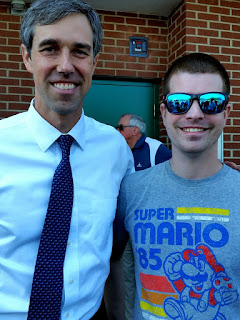 And of course, I got to get a picture with him. I'm not decided on a candidate as of yet (anyone is better than Trump) but I was really happy to get to meet him. He's also really tall, at 6' 4" he makes me look short. Even if he loses the nomination or drops out after Iowa, I do think there's a strong chance he could be a running mate to the eventual nominee. Even if I can't get a picture with a president, a picture with a Vice President would be the next best thing. Except for the current holder of that office, Mike Pence, I would prefer that terrible excuse for a human being to stay away from me at all times.
Posted by Adam at 4:40 PM

This is so awesome, Adam! Yay! Right now I'm liking Elizabeth Warren and Pete Buttigieg. I wish his name was easier to spell though.

I really both of them too, I was glad I got to meet Warren a few months ago. I'm hoping I can meet Mayor Pete as well.

I want Trump out. But at this point I been impress with Mayor Pete.
Coffee is on

What a great photo! Very cool!

A nice souvenir. Hopefully someone else wins other than Trump!

Great photo. And I completely agree about Pence. Nightmare!

That's a great photo of you two!

Lucky you, Adam! I haven't decided yet. I like Hickenlooper, Colorado's former governor, but he doesn't have the name recognition. I worry that many of the candidates are too far left.