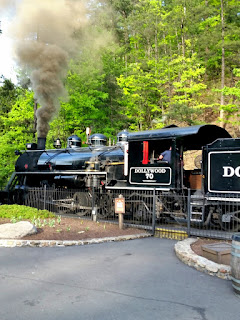 It doesn't take long for one to notice the Dollywood Express train as it rolls around the park. I originally thought it served as a "trolley" to get around the park, but it actually is it's own ride. It's a real steam locomotive train, which apparently burns a lot of coal each day. Which is terrible for climate change and pollution in general. 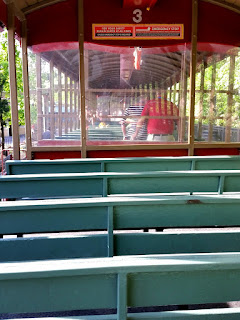 But we rode it, and the seats are not very comfortable. The train moves up some steep hills (which makes me even more uncomfortable) and some of the coal in the smoke will get all over you once the ride is done. This ride existed before the theme park became Dollywood, so I can't blame Dolly Parton too much for this one. But they really need to replace it with a better type of train, or just derail it forever.
Posted by Adam at 12:30 PM

The train looks cute even if is not very comfy

At one time they put on a train robbery when you rode the train. That was really funny.I hated it when they stopped doing it.
The trains are very dirty, very uncomfortable & probably bad for the environment but they're also a part of American history & was used during WWII. There are only about 14 working coal-fired steam engines in use today, when they go a piece of history goes too.

It's historical. But yes, bad for the environment.

That's about it's only good part, it does look neat.

I'm not too bitter about them going out of use. My city has a museum dedicated to it. But the train is now just a "house" of history.

too bad about the pollution.

Does seem like it's not good for the environment. I do like to ride the trains though when we visit theme parks. It's a way to get from one side of the park to the other when you're tired from all that walking.

Just like the mindset of the average citizen of eastern Tennessee.

Disagree, Adam! I'd so love this train ride, smoke and all!