Favorite Quotes: War Will Exist Until that Distant Day 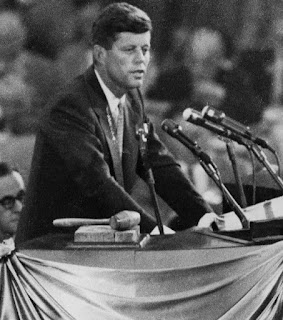 "War will exist until that distant day when the conscientious objector enjoys the same reputation and prestige that the warrior does today."

While a little ironic considering how much JFK elevated things in the Vietnam War (though Lyndon Baines Johnson messed things up royally later) but I like this quote. Every Veteran's Day, Americans thank the soldiers for their service, and I'm sure this is a common occurrence for every country in the world for their own military men. But the "unpopular" voices who protest war, they're never thanked. They don't have a holiday or a celebration. They don't get medals or awards. But many of them have saved more soldier and civilian lives than you might realize.
Posted by Adam at 11:00 AM

Kennedy might have said that after The Cuban Missile Crises, once he saw where his previous hawkishness had gotten him.

Thanks, Adam. Eisenhower really laid it out!

Well JFK knew what he was talking about and didn't go around insulting people like that lunatic you have at present is doing.
JFK also was not a DRAFT DODGER like the clown you have at present and I hope all and sundry noticed that at "HIS' version of the Bastille Parade in Paris for their national day, President Macron didn't hide behind bullet proof glass!!!!
The French showed you Yanks how to put on a show. Take note!

As for protesters, we'll my jury is still out on that lot.
They have good and bad points - Vietnam which by the way JFK was going to pull out of before he was assassinated in bloody Dallas (Still doing cartwheels of joy, "DJ" ?) was a disaster and it was Eisenhower who made the first commitment to that disgraceful conflict.
Colin

The "HIS VERSION" refers to Trump, the Turnip not JFK.
Strange JFK was highly respected by the then French President, none other than the prickly General Charles de Gaulle.!

Imagine if you can Trump and de Gaulle???? C'est IMPOSSIBLE - ha ha!
Colin