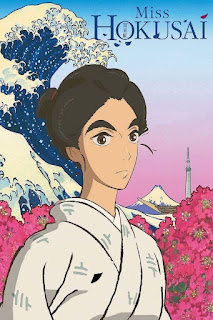 There are a lot of anime films produced by Japan every year. Some are serious, some are silly, but many are based on long-running cartoons that popular with the kids and teenagers. Miss Hokusai is certainly on the very serious side. I didn't know much about the film, but I knew I had to see it. It's based on the life of the Japanese artist Hokusai, but mostly about his daughter Oi Katsushika, whom was also an artist, much overshadowed by her iconic father and his masterpieces. 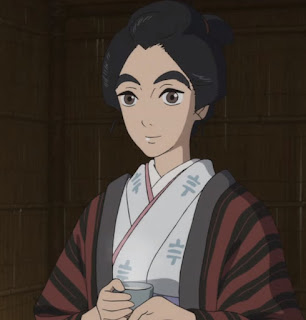 In the film, we hear more of her common name O-Ei. But by the time the story begins, she's already a grown woman. She doesn't seem to be the perfect daughter of a famous artist. She has the skills with a paint brush (or whatever tools classic Japanese artists used back then) but she isn't married, engaged, or that involved with trying to improve her romantic status. 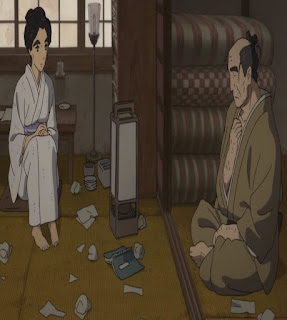 She lives with her father, Tetsuzo who is known to the world as Hokusai. They don't seem too concerned about living in an expensive house, but rather they move to a new home when they refuse to do any housework and their current home is too messy. But both of them really do know how to create wonderful art. 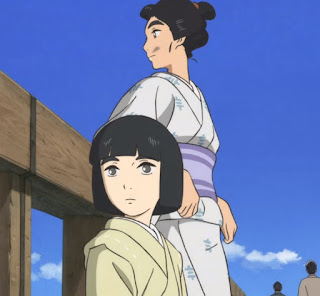 O-Ei does have more family alive than just her strange father. She has a little sister named O-Nao, whom is blind and of poor health.Her father (being afraid of the sick and the dying) never goes to visit O-Nao, to which O-Nao certainly takes notice. Neither daughtersof the arguably greatest artist in Japan is going to have it easy. 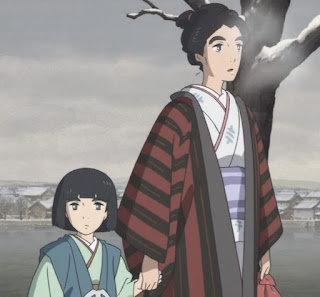 Overall I was a bit let-down by Miss Hokusai. It's a good film, but with it being based on history and real people, I can easily tell which parts had been made up to make the story more exciting. Granted, I did like how it showed Buddhism and Japanese mythology. But the plot isn't the greatest and the movie moves a bit slower than I expected.