My (Not So) Favorite Quotes: Trump Thought the Revolutionary Army Had Taken Over Airports 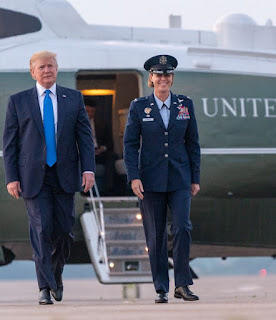 "Our Army manned the air, it rammed the ramparts, it took over the airport, it did everything it had to do and at Ft. McHenry under the rocket's red glare, it had nothing but victory."

Trump apparently blamed this one on a bad teleprompter, but even if I was reading something, I would know if I'm talking about the American Revolution or the War of 1812, there were no airplanes let alone airports. I've seen his supporters say "leave him alone, he mispoke" but they're the same ones who brought up Obama saying 57 states one time. Obama gaffes: 1 Donald Trump gaffes: Too many to keep count of.
Posted by Adam at 11:00 AM

Adam, You know it is hard to speak when one's head is you know where. LOL. I usually won't comment on politics on either party....I just wish we had another party to vote into office. Two parties is just a brawl. LOL. I am not happy with either one. Thru the years laws have been made and no ones wants to stand by them. Big cat and dog fight in congress. Over paid blow hards. :) Bless you sweet boy, xoxo, Susie

Every time Trump says something wrong, his followers say leave him alone that he's smart but got it wrong. How many times can he get things wrong before these people wake up.

He didn't mention the Nazis in his garbled account of the War of Independence either because they were good people. "Good people on both sides."

strange ! He said also that he knew the speech off by heart?????
So why the 1776 airports and planes!
He is the laughing stock of the World!
Colin

Too many idiotic speeches!