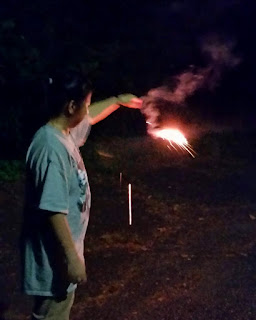 Like most Independence Days, I had to work, but Daisy was off. It was bad weather that night so we opted not to go to the city's show. We managed to shoot some off in our driveway before the rains hit hard. 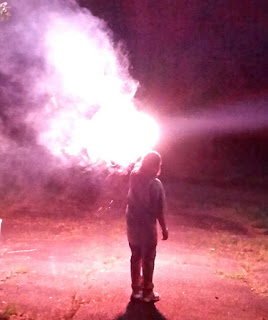 We live outside city limits so we could do so, that isn't a luxury at my mother's house. Most photos of fireworks come out bad but this is Daisy with one of the simple sparklers. I guess I got it at the right moment. They're not nearly impressive most of the time. 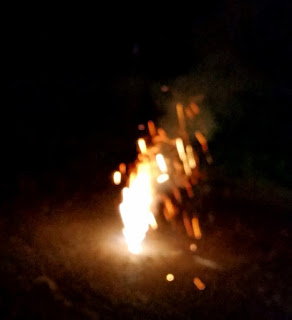 But we had a simple bag of fireworks, nothing too expensive. Some sparklers, roman candles (my favorite), some little ones, and a couple of fountains. Daisy always gets sad when the last one shows its last flames.
Posted by Adam at 11:00 AM

Too dangerous for me!

Not my cup of tea! Never have liked them as too many people get hurt.

Banned here in Australia - only supervised ones on what was in my youth called "Cracker Night" - I think it was on Guy Fawkes day.
Bushfires and silly clowns don't mix.
Colin

When I was young, fireworks were still legal in the suburbs of NYC. But they were quickly banned. I've never been comfortable being near them in other places, but love to watch professional displays. (We were, however, allowed to wave sparklers on our terrace on the 4th when we moved to the city... even though they weren't legal either.)

We never buy them. I hate seeing my money go up in flames. I will splurge on a $1 pack of sparklers for the girls, but we're all content to hit up one of the free professional shows that our city or the next one over puts on display each year.