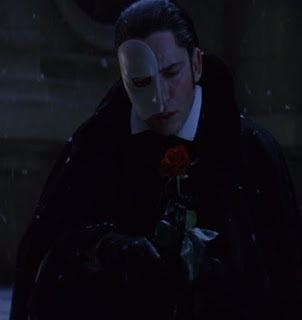 While it's not a very common story nowadays, I do know what the Phantom of the Opera is. A few TV shows I watched would do parody versions of it. I didn't know much about the real story, except the Phantom was some stalker and the girl he was after was supposed to be very beautiful. Also something about opera. This one is based on Andrew Lloyd Webber's musical (which is based on the classic novel) and he produced the film as well. Joel Schumacher helped him with the screenplay along with him being the director. 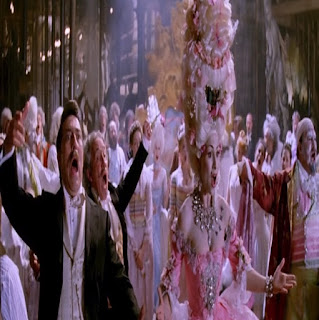 The film is set in Paris, France in 1870. A popular opera house has a new set of managers/owners after its original one retires due to health issues. But things don't go so smooth. Its leading lady, Carlotta Giudicelli decides to quit after being tormented by a mysterious and mostly unseen figure, lurking in the shadows. They fear they'll have to cancel the whole thing, but someone suggests an understudy of sorts. 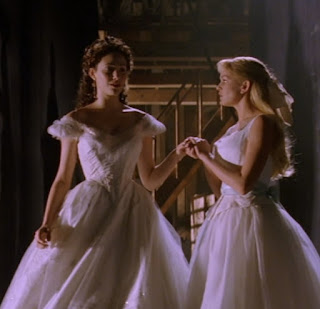 Her name is Christine Daae, a gorgeous singer of rather unknown fame. Once they hear her voice, everyone knows she could lead a show with ease. She soon runs into her childhood sweetheart Raoul de Chagny, whom is a now a minor nobleman. The two soon blossom a real romance, and things look good for her future. 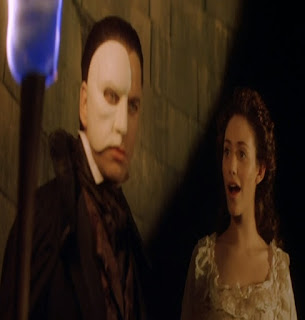 However her mentor, the Phantom of the Opera makes himself more known to her. The mysterious Erik is obsessed Christine, but he often gets angry when she gets closer to him. But he grows even more furious when he finds out that she's been seeing someone else. The Phantom is capable of murder and this opera house might see worse come to it than a lackluster crowd. Will Christine find happiness here? 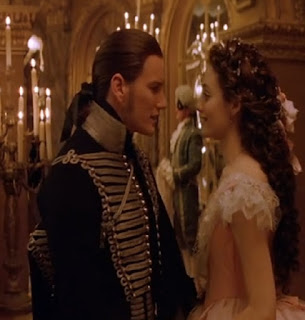 Overall this 2004 adaptation is absolutely terrible. I really like Emmy Rossum (better known to many as Fiona Gallagher on Shameless) and honestly she does well here, both in acting and singing. But the story isn't great (I will have to wonder how they messed up a beloved book, though I haven't read it) and the direction is sub-par. Even most of the songs don't seem worthy of something coming from Andrew Lloyd Webber.

I don't know how you feel about silent movies, but the version with Lon Chaney Sr is pretty spooky.