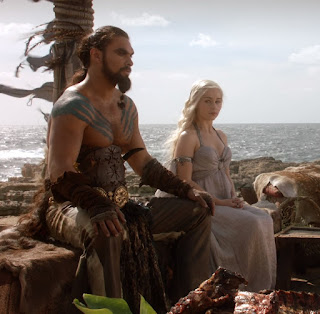 One of my favorite characters in the series, Daenerys Targaryen begins in the story as an exiled princess whose Queen Mother fled Westeros while she was still pregnant with her. When the Baratheons took the Seven Kingdoms, she lived in another land. She eventually married the Dothraki warlord Khal Drogo, and while he was often a brute, they had a loving and happy marriage. 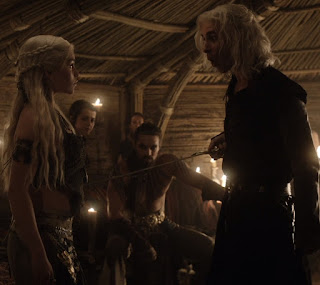 Her brother Viserys was a horrible brother and even promised to kill her a few times. He does again drunk with a sword pointed at her belly. She makes no objections or pleas for mercy when her husband pours molten gold on her brother's head which kills him. 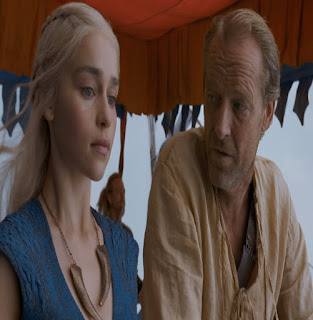 But her husband dies and so does her unborn son. She then travels throughout Essos, with three baby dragons that hatched from her husband's funeral fire. With it, she earns a lot more respect than she did back when she was younger. 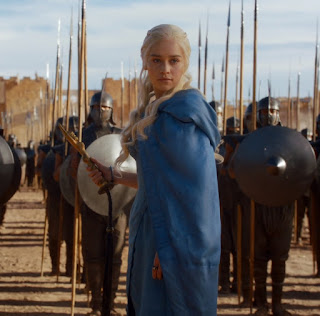 I loved how she tricked the Astapor leadership into giving her the Unsullied on the house. It's good to have a fire-breathing dragon at such times. She spends most of her time liberating slaves in Essos, with up and down results. 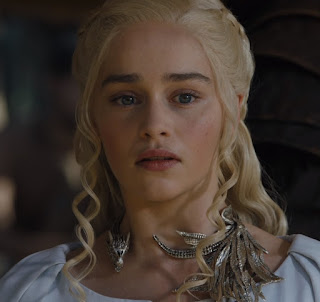 Her biggest challenge is in Meereen which she appoints herself as its Queen. She almost dies several times against assassins and armies against her, but she survives. Before she heads "home", her reign in Essos is secured. 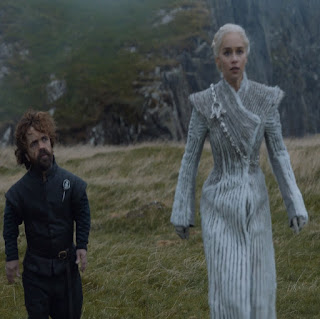 Her luck in Westeros really started to go downhill. While she had early successes, Tyrion Lannister advised her with big mistakes as her Hand of the Queen. Though she bravely fights most of her battles. 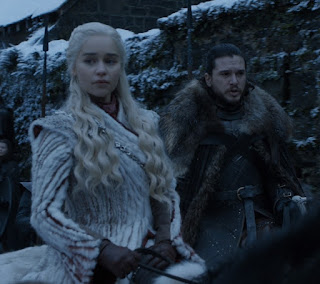 She even loses her dragon Viserion to the Night King and then Rhaegal to Cersei's forces. I liked her romance with Jon Snow, who turns out is her secret nephew...whoops...and true heir to the throne...double whoops. I thought they did well together against the Night King. 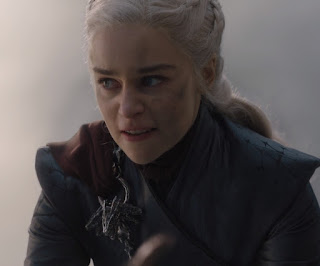 But she totally loses it against Cersei. Granted she lost a lot in her life up to that point, had a lot to be paranoid about, and didn't have much to lose besides her big dragon, her semi-boyfriend, and her family's iron chair. Many people called her the "Mad Queen" but I wouldn't call her crazy, just extremely enraged. 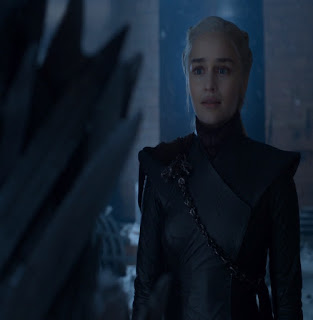 Once she gets the Seven Kingdoms, she goes all WTF dictator with some kind of strange worldwide goal of "liberating" people. Before she gets a chance to sit on the Iron Throne, Jon Snow comes to visit.

And while she tries to rekindle their romance, he stabs her with a dagger. I really liked Dany most of the series, but I was glad to see Jon do it. They totally ruined her character, and quite fast. I hope her fate is better in the books.
Posted by Adam at 11:30 PM

Email ThisBlogThis!Share to TwitterShare to FacebookShare to Pinterest
Labels: emilia clarke, game of thrones, things I like

I liked Dany too, even when she turned kinda evil. Her character was really well-written!

Only ever seen a few clips from GoT, but Daenerys did seem like a good character. Everyone seems to be mad at the ending for throwing away continuity and credibility for a cheap shock.

It couldn't end any other way.