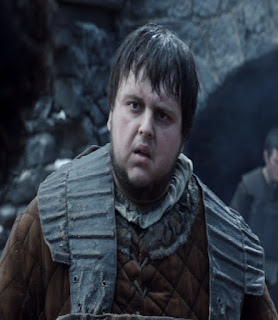 I like Sam Tarly because he's one of the most unusual characters on the side of good. He's pathetic, fat, clumsy...but he has a good heart. He joins the Night's Watch when his father knows he'll be a terrible heir but his little brother would be the lord of the future. Sam technically didn't have to join the Night's Watch, but his father claimed he would perish in a "hunting accident" if he didn't. He's not well liked in the Night's Watch neither by cadets, regulars, or officers. 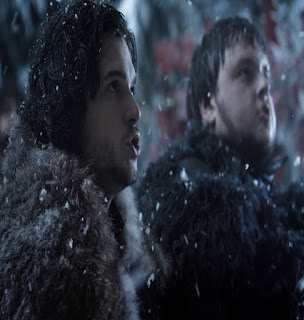 But he befriends Jon Snow and the Bastard of Winterfell protects him when he can. Lord Commander Jeor Mormont also has a soft spot for Sam. Both Sam and Jon go beyond the Wall and see the danger of both the Free Folk army and the Army of the Dead. 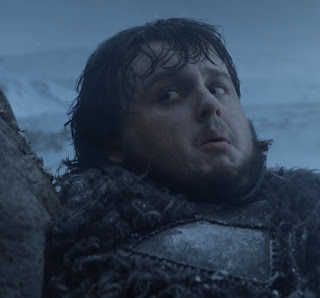 Sam somehow manages to "hide" from a marching army of White Walkers and wights. I had assumed that the undead didn't attack cowards but this plot point never resolved on why Sam was spared when a White Walker clearly saw him. Somehow staying alive despite no skill in doing so is Sam's hidden talent. 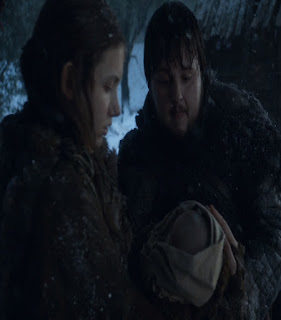 He isn't around Jon Snow too much for long. He befriends Craster's daughter Gilly and slays a White Walker coming for her baby son. Whom she names Little Sam in his honor. Then the two fall in love. 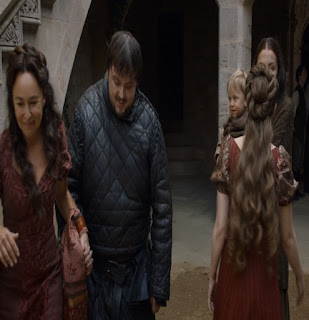 And Sam tries to pretend to his family that Gilly is his girlfriend and that Little Sam is his son. Some truths, but mostly false words. I liked his mom, sister, and brother, but his father was a pure evil man. 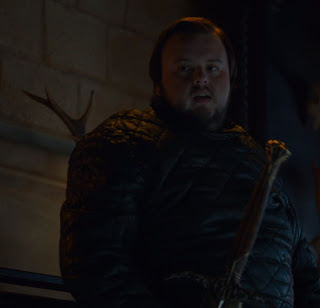 I did think Sam did a brave thing by taking his family sword under his father's nose. 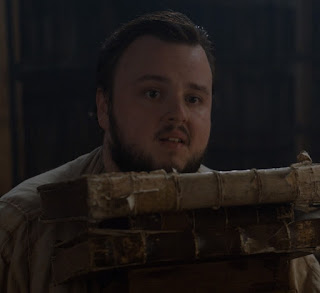 I thought his time at the Citadel was a little pointless. Like a doctor, it apparently takes years to be a Maester, and Sam kind of quits the whole thing. But he managed to cure Jorah Mormont of greyscale and he learned that Jon Snow was the trueborn heir to the Iron Throne. Not bad! 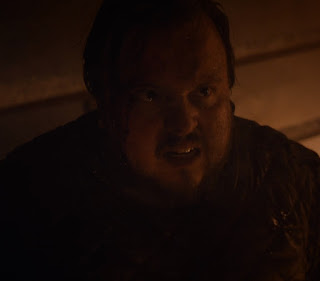 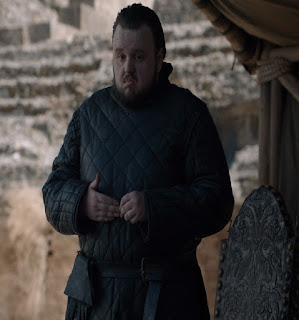 At the end of the series, Sam seems to speak for House Tarly as one of the greatest houses of Westeros. He then invents democracy, and is laughed at... 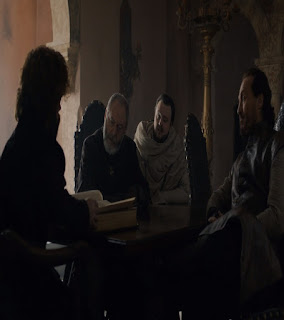 But he becomes the Grand Maester on the King's Small Council. Which doesn't seem to be possible due to his short time at the Citadel. Got to love plot-holes.
Posted by Adam at 11:30 PM

Never watched Game of Thrones as yet.

Love Sam too! Agree that there are plot holes in regards to what happened to him, but am just glad he didn't die:D

I really liked Sam, and I'm fine with the plot holes. I'm very happy that Sam lived. I wouldn't wish his brother's fate on anyone.