I Got To See Mayor Pete Buttigeg at Wofford College Yesterday 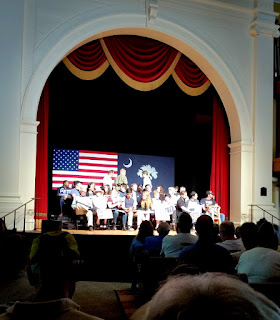 I try to see as many candidates in the Democratic presidential primary as I can. Wofford College let Pete Buttigeg hold a "town hall" as they welcome all major candidates of nearly any opinion. The Dean of the college let everyone know that Woodrow Wilson, Gerald Ford, and George H.W. Bush had once stepped on that very stage. 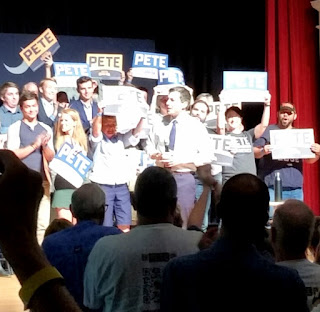 It took Mayor Pete about 35 minutes to actually get out and speak and do the whole questions and answers. What makes him a bit different from the other Democrats is that he wants to appeal to Christian faith-based voters (most which are going to swarm to the Republican Party) and his Medicare for All is more like a beefed up version of Obamacare rather than "Medicare for All." 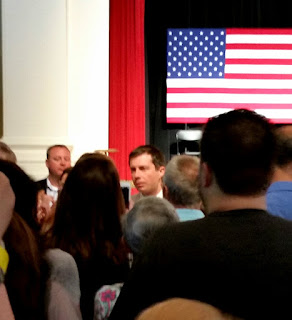 Unlike when I saw Warren (she vowed to stay to the last person), Mayor Pete did not say anything about meeting people for pictures and handshakes. 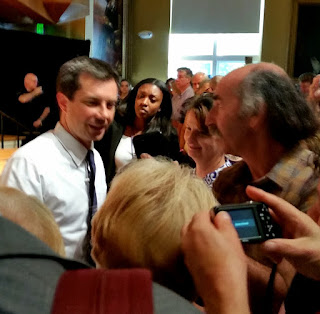 But sure enough it happened anyway. It was a crowd of chaos and no order. 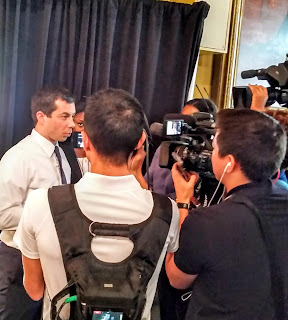 Right before we had our chance (as you can see how close I got here), the local news hounded him and asked him questions. He had about maybe forty people waiting for a chance to meet him after the press were told no more questions...and he just left. Just like that... I thought that was really uncool and pretty wrong. I could understand if he had a packed out football stadium full of people (like I heard Bernie Sanders had drawn in Seattle before) but he could have made everyone happy with an extra fifteen minutes of his time. 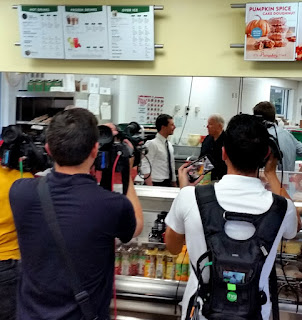 Wofford College is right near Krispy Kreme, which is owned by a Democratic state senator (Columbia SC, not Washington DC) named Glenn Reese. I just happened to walk in to get some snacks and Mayor Peter came by to see Glenn. Still no photo with him or a handshake. For a crowded primary of folks, you'd think maybe just maybe, he wouldn't want to alienate crucial votes in a early primary state?  You think I'm voting for him now in the primary? Nope!
Posted by Adam at 5:00 PM

I didn't know he was gunning for the Christian GOP voters. Interesting. I suppose it'll be the few Christian voters who aren't afraid of Gays.

That's disappointing. Have you zeroed in on a candidate yet?

There are so many candidates, who know who is who at the moment.

Adam, that's so cool you're trying to see as many Democratic candidates as you can. Honestly, if I'm American, I'd vote for Warren. Sanders is my second choice.

Interesting how he thinking he trying for the christian vote. I thought his knowledge on the debate stage was knowledgeable. I could see him in office of secretary of state.
Coffee is on

Just get a young one into the White House - not some HAS BEEN - EG: Sanders or Biden - they are past their USED BY DATE.

Really Adam, they just can't acknowledge everyone - remember some people just love to HOG the limelight and would bore the poor fellow to death.
Colin

I'm sorry you felt snubbed by Mayor Pete. He's actually a very approachable guy and has always been patient with the locals here wanting a handshake, a few words, or even a photo. Maybe he was just having an off night there. While he won't be getting my vote for president, I hope you base your vote off what the candidate can bring to the table, not because you missed a photo opp.

By the time any Democratic candidates show up in Colorado, the field will be much narrower. I am leaning toward Biden. I am concerned about how far left of center the Democratic Party is moving. I could never, ever vote for Trump though. Regardless of who the Democratic nominee is he or she has my vote.