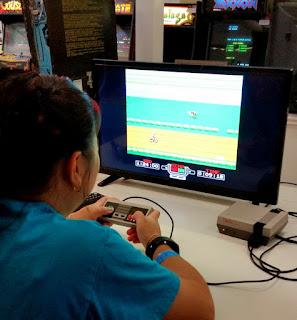 They had one of these digital systems that recreated the old NES and its games at the Carolina Arcade Museum. When Nintendo made these things not long ago, places couldn't keep them on the shelves. But Daisy played this more than I. 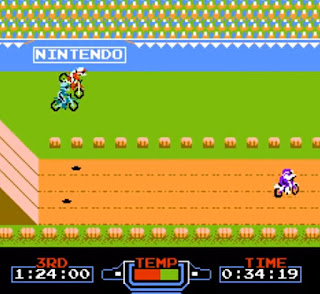 I had seen she was playing Excitebike, which was something I had as a kid. It was pretty advance for early Nintendo games, though I honestly never had much of a clue what I was doing. But the jumps in the air were fun.
Posted by Adam at 12:00 PM

I often wonder if this is the basis for Minecraft's popularity. Well, one reason.

These things are super cool, aren't they? Do you have the Playstation Classic? I like that one too coz it has Tekken:D

My gr-daughters are good at this, and frustrated that I am not.

I remember when it was the got to have item of the year. I spent hours playing Mario Brothers and Duck Hunt when it came out.