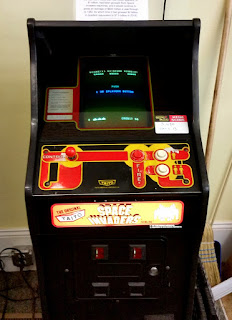 This was the first arcade game I played at the Carolina Arcade Museum in Forest City, NC. I assume (with a lot of educated guessing to back it up) that this the original arcade machine and not a later version. The game has been super popular so there had been many re-releases over the decades. But I would say this is probably the original because it certainly feels more like a prototype. The unit is pretty short and the controls aren't super-comfortable. 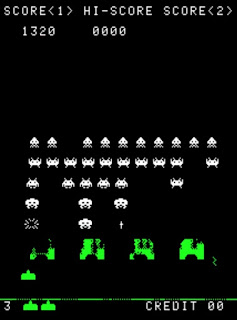 Space Invaders was super popular for many reasons, but I'd say the main reason alone, it was more or less the most advance game of its time. In 1978, it took both Japan and America by storm. A popular urban legend (mostly myth with a little truth) is that Japan ran out of yen coins because of the game and had to ramp up production to meet demand. 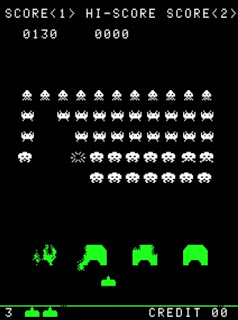 I've played it many times over the years but never in the arcade. It hasn't aged well. It's slow, rather pointless, and super difficult. If it had come out in 1988, nobody would even remember the game. There's a reason most bowling alleys have Ms. Pac-Man but never Space Invaders.
Posted by Adam at 12:00 PM

This was my husband's favorite video game.

My husband got addicted to PacMan to the point that I noticed our coin jar was missing quarters.

So jealous, I wish I could go to an arcade museum too! That must be so fun!

one of the few games I was good at, I think it was that one.

I didn't see the point to Space Invaders, but I did enjoy playing Pac Man.

My brother and son loved to go to arcades. They are probably more familiar with space invaders than I am:)

Oh, I remember Space Invaders. it became popular when I was in high school. There was even a song about it.