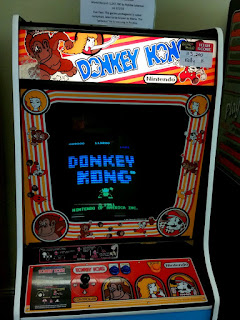 I was a bit excited to try this one out. It's a big piece of Nintendo history. Before Donkey Kong, Nintendo was a rather unknown and rather mediocre video game maker who made a few ripoffs than their own truly original work. 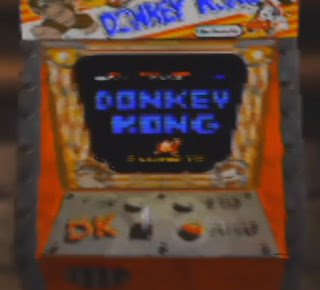 It wasn't my first time with the game. As a kid, I found the secret "arcade machine" hidden in Donkey Kong 64. I assumed the NES version was in this game, but no it was the arcade original. 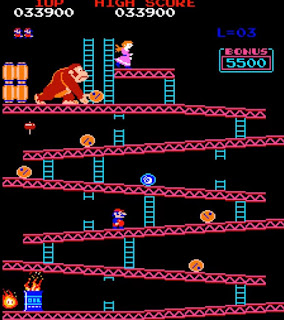 For some reason, I think the arcade game is much harder than the NES version. I blame the joystick, as I find a D-pad to be much easier to control Mario here. 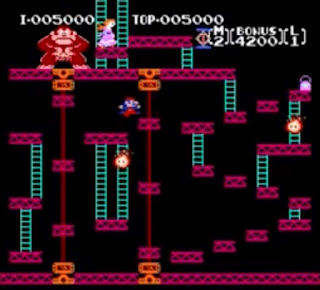 Speaking of the NES version, it was a pretty faithful to the arcade version in graphics. Though it was missing a level. which is odd since the NES had much larger and better games after Donkey Kong. 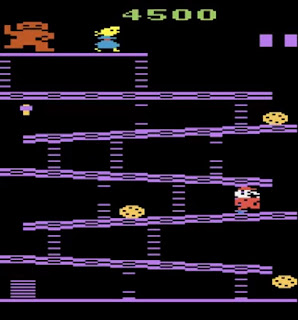 I'm sure it was better than the Atari 2600 version which came out before Nintendo had a home console. Are those chocolate-chip cookies or barrels? 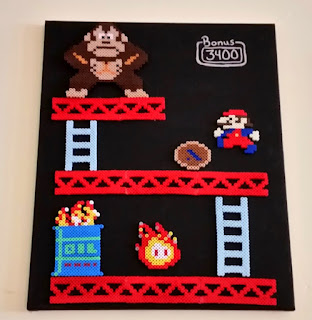 They also had this pretty neat art on the wall. All things said, I didn't spend much time with the game. I played the NES version a lot, and I kept dying over and over with the arcade version.
Posted by Adam at 12:00 PM

I remember playing that when I was a kid.

Donkey Kong meant nothing to my hubby. He liked Tron.