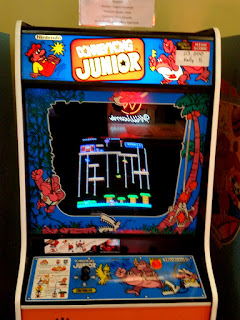 Right next to the original Donkey Kong arcade game was Donkey Kong Jr. This actually had you as Donkey Kong's son, and you try to free your dad from Mario. The only Nintendo game where Mario is a bad guy. Good or bad is all a matter of perspective. 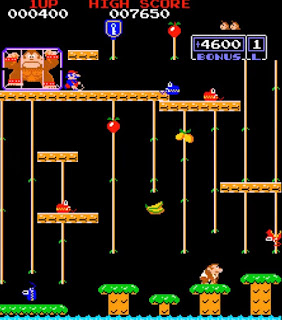 And it's a much different game than the original. You mainly grab onto vines as DK Jr. While you can tell the game was made by the same team, it certainly is unique. 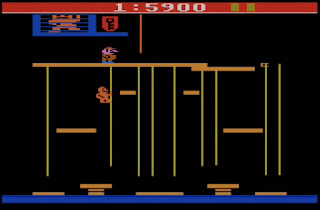 It was one of the rare Nintendo games to land on the Atari 2600 (above) back in the day. As Nintendo had not yet made their own home systems yet. It doesn't look so good. 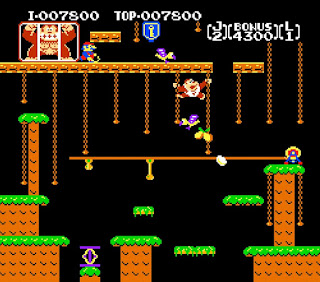 I was a big fan of the NES version (above), though I didn't dig the arcade original too much. I guess they made it more difficult, because I sure didn't get too far in the game.
Posted by Adam at 12:00 PM

I don't remember Donkey Kong or Donkey Kong Jr, I'm old enough that I was there when the arcade games first came out. Of course, I spent my quarters on Pac Man. My sons did have, I think, both of those on the NES and 64. I definitely remember Mario.