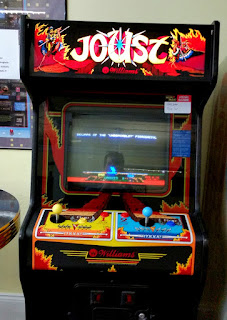 Joust is a game I remember from a collection disk on PS1 that my brother Brandon had. We didn't have many games in our youth, so I spent a lot of time with Joust. It was made by Williams, a company now more famous for their pinball machines. They also made Defender, which had a PS2/Xbox/Gamecube revival, but by 2002, Williams didn't make video games anymore and they handed it off to Midway. 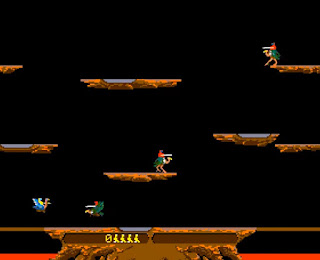 The gameplay has aged (and the screen doesn't look as sharp as this image) but it can still be enjoyable to one who hasn't played it for a lot of hours. I found it harder to control with an arcade joystick as I had a D-pad on PS1. I didn't play it for long here though. 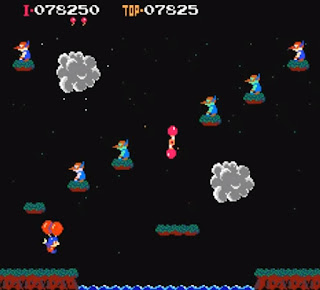 I will say, Nintendo's Balloon Fight (above) on NES was a much better game. Too bad neither of these series really took off after the 8-bit era.
Posted by Adam at 12:00 PM

"It was made by Williams, a company now more famous for their pinball machines."

From about 1980 on, a lot of pinball machines in arcades were replaced by video games. Williams must have been trying to cover all bases.

don't remember this one.

My kids would know this one. they are the right age.