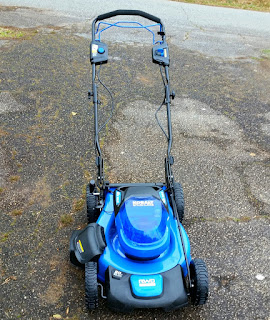 My little gas lawn mower is starting to show its age, so I decided to try to replace it with an electric lawn mower this time. I'm way more eco-friendly than most of the people who live here (most of them are Republican, who usually spit on ways to help the Earth to somehow "show the liberals") and I heard good things about these rather newer mowers. For years, they only had these in push, and that would not do. I managed to get one that is self-propelled. 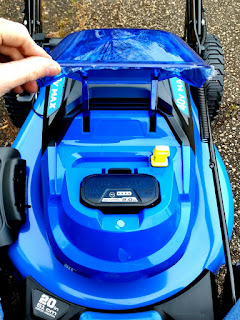 One of the advantages to an electric mower is that obviously there's no gas. There's also no oil, belts, or spark plugs. Where the engine would be, is where you need to insert the battery. It's also super quiet too, sounds like a low-key leaf blower when the blades start to move. 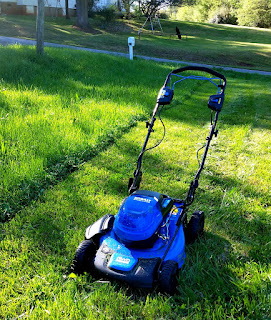 It's also very light weight. My old Husqvarna mower not only had the gas engine weighing it down, but pretty high quality steel in its make. Which is good in many ways, but it would make me exhausted often times, even when it would push itself, most of the time. As far as the Kobalt's power, it cuts pretty darn close to the power and speed of a gas mower of a similar size and shape. 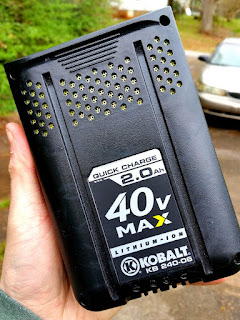 The downside is the run-time. I made a foolish decision to get one without a battery because I already had two. All the 40 volt series use the same type battery, but I didn't realize the two I got for my hedge trimmer and string trimmer were 2.0 amp hours. The one that comes with the mower is at 5 amp hours. So even with both of my batteries, I'm at 4/5th the run-time of what I could have gotten if I hadn't been frugal without research. That being said, the lesser batteries can still mow a good chunk of the yard before dying out, even with the self-propelled in action. For smaller yards or if you're trying to get places where a riding mower can't go, this would be a good idea. For people with big yards, this isn't for you. 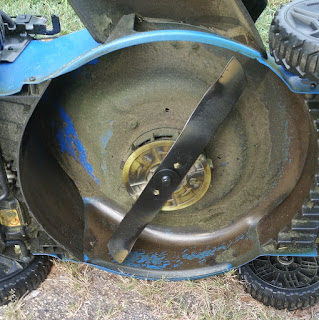 One thing I do love about it being electric is that it's easy to clean. Southern grass is pretty tough and would make a mess out of my old lawnmowers. I couldn't flip them over because the gas would leak, but that isn't a thing with electric. 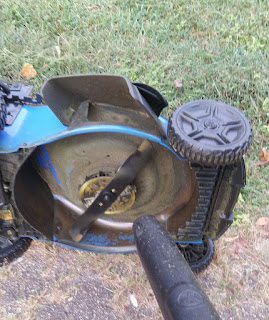 I just take the battery out and use my leaf blower to clean the majority of it before putting it back into the garage. Typically I clean it after my batteries have lost their power, but typically there's enough energy left to put in my Kobalt leaf blower for the cleaning.
Posted by Adam at 11:00 AM

Are you able to get an upgraded battery after the fact? Anything that helps the environment is OK with me. :)

Good for you with this new mower!

I really like that is eco friendly and not heavy!

No more lawn mowing for me at all now that we live in the woods!

I admire people who try to do something for the Earth. Kudos to you, Adam. This looks like a great machine.

Wow, awesome! Nice that you care about the earth, too :)

Our yard is huge, so we have a riding mower, but once we downsize, I'd like to go with an electric one too. Looks nice, Adam.

I meant to also say I didn't know they had battery powered ones now instead of those long cords.

Did you try Amazon? I like to believe that they have everything. :)