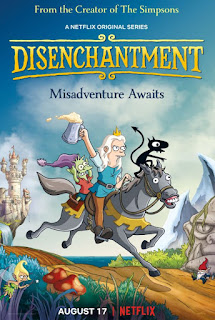 Disenchantment is a TV series I noticed last year when it landed on Netflix. Matt Groening (of The Simpsons and Futurama fame) made this new series for Netflix. Which I was a little dubious about, to be honest. Both of his other series were pretty good but critics didn't seem to be behind Disenchantment very much. Since The Simpsons is my 2nd favorite show of all time (Game of Thrones is #1), I felt like I should give Disenchantment a chance. 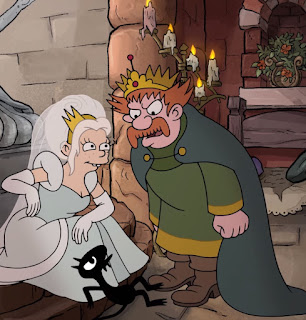 The story's main character is Tiabeanie Mariabeanie De La Rochambeaux Grunkwitz, or "Bean" for short. She's a princess in a kingdom called Dreamland. Her mother Queen Dagmar died when she was very little, but her brute of a father, King Zog has gotten her engaged to some stupid prince from some land she cares little for. She really doesn't want to marry, especially not for some kind of dumb political alliance. 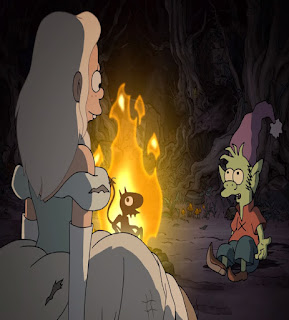 So she runs away with her personal demon (who everyone thinks is a "talking cat") named Luci. Soon enough they meet a mostly pure-hearted elf named Elfo, who got sick of the happy-sunshine tone of his village and wanted a bit of the human reality for a change. And his elf kin also kind of kicked him out too. Soon the trio becomes the best of friends...sort of. 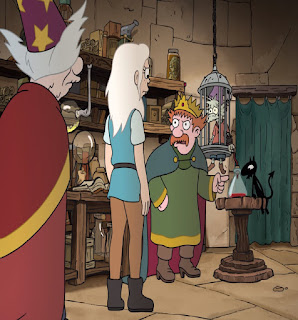 King Zog takes quick notice of Elfo, and believes his elf blood has magical properties. Since elves are quite rare in the lands of humans, Elfo is tolerated by King Zog while Luci is mostly ignored. King Zog hates that his daughter has no mission in life, she makes bad choices, and she's little more than a drunk who happens to be a princess. The Dreamland kingdom is probably the least happy place on Earth. 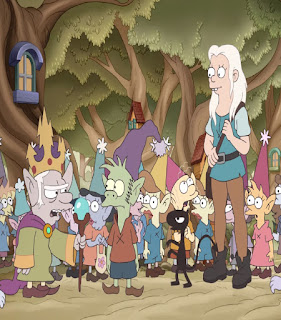 Overall I liked Disenchantment a little more than I expected, but it does have its issues. It makes some pretty good jokes, but many of them fall flat. Besides Bean, Luci, and Elfo (and to a lesser extent King Zog) all the other characters are mostly useless and frankly a waste of space. Its story and comedy get better with time. It actually ends on a pretty interesting note, so let's see if Matt Groening and Netflix can save this series while they still have a chance.

I'm a fan of both The Simpsons and Futurama (as well as Groening's alternative comic strip Life is Hell), so I'd be willing to check it out.